“the power of re-framing things cannot be overstated.”

When a group of students came together as part of Kristin Hughes and Tim Zak’s class, they never expected their class project to cause ripples of change within the Pittsburgh community. Designed and conceived of as part of their Design & Policy for Humanitarian Impact class in the Fall of 2014, the team created the Wilkinsburg Vacant Home Tour. The WIlkinsburg Vacant Home Tour is a self-guided tour, showcasing abandoned and vacant properties, leading tour participants on a journey back in time through the narratives of these homes and buildings, addressing and reframing the problem of blight. Blight is defined as a "disease" and refers to the degradation of buildings, neighborhoods, and communities as a result of abandoned and vacant buildings. 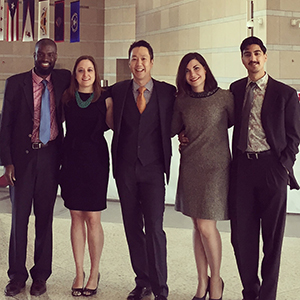 When Shawneil Campbell, Kenneth Chu, Reneca Cuenca, Eleni Katrini, Robyn Lambert, Anna Malone, and Karlee Turkaly  originally came together in class to address how they could tackle one of Peduto’s 100 policies in Pittsburgh, blight surfaced as a point of passion for all of them. With some ties to Wilkinsburg through friends, the group discovered the fascinating stories held by the abandoned buildings. Tools and resources exist to acquire some of these properties, but demand has been low and the tools and resources have been under-utilized. The change needed was to increase interest in the properties and to connect people with the tools and resources available.

After interviewing residents at the local community center, Hosanna House, the students realized that the residents mostly travelled outside the borough for jobs but continued to live in WIlkinsburg because of the close bonds and strong community within the neighborhood. Showcasing this rich history, the students decided that this was their touchpoint to “change the conversation and perception to empower people around blight." 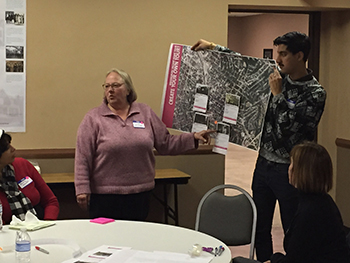 As they did further research, they realized there were already projects in motion. Dee Briggs, an adjunct assistant professor of Art and Architecture, had already begun a project called the “House of Gold” where she proceeded to have a “gentle demolition” and paint the entire house gold to showcase the stories about the building. Residents would actually put up their own stories about the house online, creating a platform for sharing and building stronger ties.

With that in mind, the students started thinking about how to find a way to showcase these properties in a positive way and connect people with the tools and resources available to acquire them. With things such as “blight porn” and trespassing on vacant homes becoming a movement, the students were thinking about how to harness these trends to not only help outsiders come in but involve the community. They wanted to design a program that relied on the residents themselves so that they are engaged and they are the ones telling their own stories. in the Vacant Home Tour, residents from the neighborhood serve as Tour Guides, greeting participants at each stop and telling the forgotten stories of these properties. It has really become a changing force since the community works together to put up the tour and do the research themselves. The students claim while the Vacant Home Tour was something they designed, “it was something that the community put together and the students simply provided them with the framework to be able to give them agency over the project." 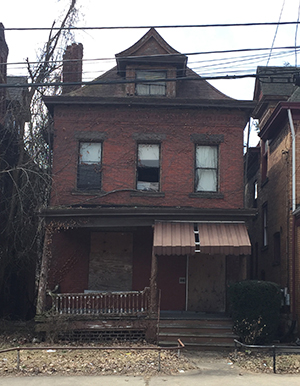 The students have also been amazed by how many people have stepped up from the neighborhood to help out. The Pittsburgh Urban Christian school will spend their clean up day cleaning up the route for the tour, while the Borough Council is helping package some of the houses for the Vacant Property Recovery Program, one of the many tools available to acquire one of these properties.

As the project moves forward the students hope to achieve 3 main goals:

1. Engage the community and provide them with agency

2. Bring a critical mass to the Wilkinsburg area and engage them with blight in a positive manner (a critical mass of people with renewed focus on these homes may result in solutions that are completely new - solutions of which none of us individually have thought of, but which a diverse group of tour participants might innovate together )

3. Transition these homes from being blighted to something more useful for the community (the tour gives newcomers their first exposure to the homes)

There are four main components to the tour:

1. Tour guides: residents who facilitate the process of going through the neighborhood

2. Mapping the narrative: a delightful show of various installations highlight aspects of the neighbhorhood

3. Looking through the glass: having  old photos of the houses on display to see the history

4. A resource workshop: led by the Pittsburgh Historic Landmarks foundation, the workshop informs the tour participants on the tools to acquire the properties, as well as mortgage and recovery programs.

The Vacant Home Tour was selected as a Finalist in the Fels National Public Policy Challenge in March of 2015. The project is currently being implemented by the team with the supported of the Wilkinsburg Community Development Corporation, the Pittsburgh History & Landmarks Foundation, the Wilkinsburg Historical Society, the Hosanna House, the Wilkinsburg Borough Council, and Neighborhood Allies.

The first WIlkinsburg Home Tour is being held on May 9, 2015 from 11 AM to 3 PM. Please visit their website and Facebook page for more information!