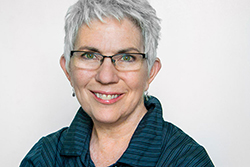 "It is our great honour and privilege at Emily Carr University to publicly recognize the immense contributions to the fields of contemporary art and design made by these three individuals as dynamic artists, innovative designers and compelling advocates," says ECU president Gillian Siddall.

"As provocative leaders in their respective fields, Lawrence Paul Yuxweluptun Lets'lo:tseltun, Terry Irwin and Marianne Nicolson embody the spirit and purpose of Emily Carr University — making a bold and lasting impact on creative practice and cultural engagement, thereby inspiring and informing the facilitation of future thought leaders and changemakers."

Irwin is the Head of the School of Design at Carnegie Mellon University and has been teaching at the University level since 1986. Her research is in Transition Design, a new area of design study, practice and research that argues for societal transition toward more sustainable futures. Terry, along with Gideon Kossoff and Cameron Tonkinwise developed Transition Design and integrated into programs and curricula at the School of Design in 2014.

She has been a practicing designer for more than 40 years and was one of the founding partners of MetaDesign, an international design firm with offices in Berlin, London, San Francisco and Zurich. She served as the Creative Director of the San Francisco office from 1992 to 2002 and worked with Fortune 500 clients such as Nike, Apple Computer, Hewlett-Packard, Barclay's Bank, Ernst and Young (EY), Nissan, Sony, and Berlin's Transport company, BVG. MetaDesign worked on projects in the areas of computer software and interface design, brand identity systems, exhibition and way finding and information design.

From 2010 to 2013, she led a series of faculty retreats and work sessions to redesign curricula at the School of Design to place design for society and the environment at the heart of its program. The School launched all new programs and curricula in fall, 2014.

Irwin will be presented with the Honorary Doctorate at Emily Carr's convocation Ceremony on Saturday, May 4th at the Chan Center for the Performing Arts.