As Earth Day approaches, it’s important to consider social design initiatives on both large and small scales. As part of their senior studio project, which focused on community engagement and transformation in Pittsburgh’s Hill District, a group of undergraduate design students have been working on improving a community garden, by finding new ways for it to be accessible to families. 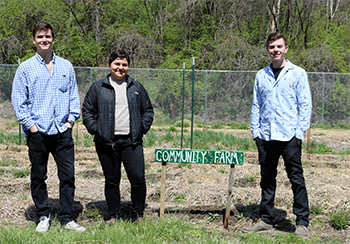 Three seniors at Carnegie Mellon University’s School of Design, Andrija Zuzul (Industrial Design), Lizzy Nolin (Communication Design), and David Power (Industrial Design) are working to design a play space in the Martin Luther King Community Garden in the Hill District.  The Hill District, once a vibrant arts and cultural district in Pittsburgh, is now full of vacant lots and subject to urban blight. The MLK Garden is run through Grow Pittsburgh, an urban agriculture organization in the city. 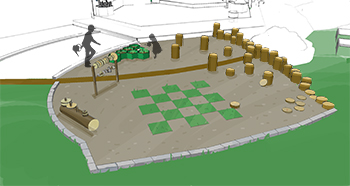 As with most community gardens, neighbors can visit the space, be assigned plots of land, and grow their own produce. This provides opportunities for fresh, local food, while fostering community engagement. The frequent visitors of the MLK Garden, however, have been faced with an issue. Many of the gardeners bring their children along with them to the garden and struggle to keep them entertained.

Introduced to this problem through Associate Professor Dylan Vitone, the three student designers assembled to create a play space within the community garden that would engage the children and also get them used to planting practices. Throughout the semester, Power and Zuzul focused mostly on the building of the physical space, while Nolin concentrated on the branding of the playground, as well as the creation of a large knit mural for the existing chain-link fence. 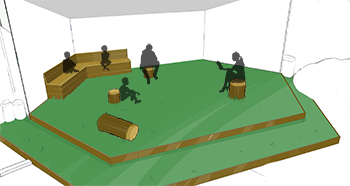 Client feedback was integral to the team’s process. Their clients, the gardeners in the space and members of Grow Pittsburgh, offered feedback that directed and redirected the designers’ concepts.

"Originally, we had designed a playground geared towards being a fun, educational space,” Zuzul explained. "It was a rigid and set structure that would have different stations clearly assigned to different activities.”

But from the feedback, they learned that such rigidity wouldn’t keep the kids’ attention. Rather, open-ended, loose, natural parts would work better to engage the kids.

"This was a bit of a challenge for us,” Zuzul continued. “How do you design something that nature itself has already designed, and how do you find a form and structure for an open-ended play space? The obvious response would to just leave the field open and let the kids run around.”

The team brainstormed as to how they could give form to the space without introducing too much structure. They decided not to segregate sections but instead create layouts that reflect movement within the space based on activities the children might want to engage in which are differentiated only in the ground covering and the elevation. 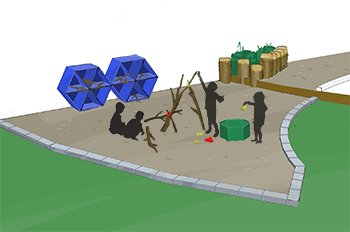 Another challenge the team had to deal with was their budget. This required the team to do a lot of research into current recycled material playgrounds and how they employ low-budget elements to create a space that is both entertaining and will stand the test of time.

Currently, the team has designed the layout of the playground and is in the process of developing different scenarios of use within the space itself. Zuzul described the team’s ultimate goal as “to fully design multiple experiences that children could have in the playground, build certain elements that we would provide to the space, and present it all to the folks at Grow Pittsburgh with hopes that they will continue construction of the playground itself after we’ve graduated.” 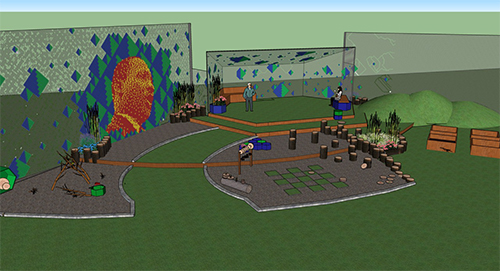 Zuzul, Nolin and Power thoroughly enjoyed designing a space that will thrive in ways it was not originally designed to do, but, most importantly, they hope their designs will help to provide a valuable and fun service for the Martin Luther King, Jr. Garden and the Hill District community.

Looking Back at the Winterhouse Symposium