A copy of the MoonArk, a cultural payload headed to the moon in late 2022, has just been added to the permanent art collection of the Smithsonian’s National Air & Space Museum.

A cultural marker designed to last hundreds of thousands of years on the Moon, the MoonArk is envisioned to spark wonderment for future humans through poetically entangled visual narratives of the arts, humanities, sciences and technologies, the MoonArk will be the cultural payload on the first private delivery to the lunar service by Pittsburgh company and CMU spin-off, Astrobotic.

Comprised of four independent chambers and weighing a total of about 9 ounces, the MoonArk contains hundreds of images, poems, music, nano-objects, mechanisms and earthly samples intertwined through complex narratives that blur the boundaries between worlds seen and unseen. It is designed to direct our attention from the Earth outward, into the cosmos and beyond and reflects back to Earth as an endless dialogue that speaks to humanity's context within the universe.

Fabrication of the MoonArk has instigated original innovation and invention of digital fabrication techniques, ultra-high resolution imaging and many innovations in material science, technology and the arts. It has also engaged colleagues across the world. The project involves 12 units at CMU, 18 universities and organizations, 60 team members and more than 250 contributing artists, designers, educators, scientists, choreographers, poets, writers and musicians. 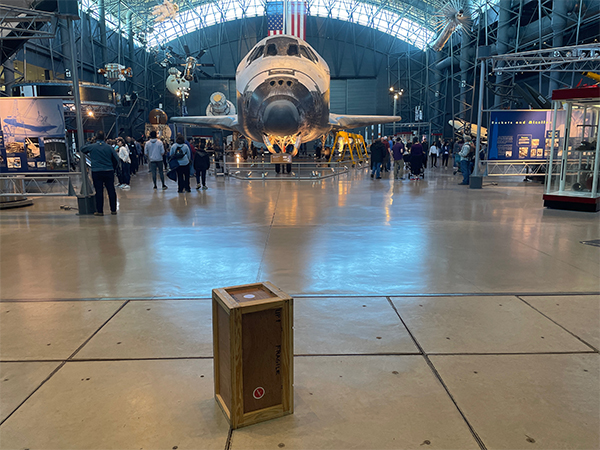 The MoonArk twin arrives at the Smithsonian

The MoonArk team sees the addition of the Earthbound MoonArk to the Smithsonian’s permanent collection as the ideal destination for their work.

“For our team it's about having the MoonArk available to the public here today and into the future,” said Associate Professor and Director of the MoonArk Project Mark Baskinger “The moon remains a distant concept and we hope that the object in the museum allows people to envision the object on the lunar surface and to project forward in time toward a very distant future where that object is discovered to become a cultural artifact.

“After seeing the MoonArk in person, many are surprised by how small and delicate the object appears, yet how robust and strong it actually is,” added Baskinger. “In holding it, one gets a sense of its material permanence and potential longevity. Seeing it in the museum hopefully elevates these attributes in some way for the public.”

“I think it's interesting to have the ability to see up close what's so far away and out of reach,” said Associate Teaching Professor Matthew Zywica. “The Moon Ark will be alone on the moon for who knows how long, but in the Smithsonian, people will still have access to whatever it might represent. I see it as a way to continue conversations about our presence as human beings, inward, emotional, intellectual; outward and influencing earth; our pursuits beyond the earth's atmosphere and questioning them.  The MoonArk reminds me about how small we are and at the same time, how impactful we've become.”

For Golan Levin, Professor of Art and Co-Director of the Frank-Ratchye STUDIO for Creative Inquiry, the MoonArk gives us the opportunity to “express our desire to engage beyond the limits of our little world.”

“’Moon Drawings’, the particular component of the MoonArk that I oversaw, is a participatory artwork that collected doodles from nearly ten thousand people from across the globe,” said Levin. “I feel deeply privileged to have had the chance to inspire and organize these participants, and to conduct their small but lively contributions to another world. Too often, institutionally built projects become hampered by minute questions of ownership rather than grand inquiries of transformative experience. The ‘Moon Drawings’ disc still feels to me like a perfect illustration of how the MoonArk belongs to everyone and no one.”

“I am so very grateful it ended up at the Smithsonian National Air and Space Museum,” added Associate Professor Dylan Vitone. “We spent the majority of the hours on the majority of the days on the majority of the weeks over the better part of 10 years dreaming up the MoonArk and making it real with a large group of amazing people. It was a little hard to let go, but as we watched the crate get carried past the space shuttle, past the first planes of flight, past the history of space travel and aviation we became pretty overwhelmed with gratitude that it would be housed in such an amazing institution.

“It is a museum that is about human triumphs in technology and large groups of people working together in aspiring for something greater than just the individual accomplishments,” continued Vitone. “We hope in a very small and humble way that is what the MoonArk embodies. We are so grateful to Carolyn Russo who believed in the project enough to champion it through the acquisition process.”

“The Smithsonian National Air and Space Museum conveys stories through human and technological achievements, scientific and curatorial research, and artifacts and art collections,” said Carolyn Russo, Museum Specialist and Curator of Art at the Smithsonian Institution. “Similarly, the sculptural artifact MoonArk encapsulates a parallel narrative focusing on the humanities, art, and culture for visitors to the Moon. The Earthbound MoonArk has undergone a long journey as we have been working with Mark Baskinger and Carnegie Mellon since 2016 on this acquisition for the Smithsonian.”

“We are excited to share this highly collaborative and creative project with our visitors to give them a glimpse of new interpretations through art, and what future moonwalkers will discover on the lunar surface.”

MoonArk is earmarked for display in the Smithsonian National Air and Space Museum's upcoming Flight and the Arts Center to open in 2025 (pending funding). Museum sponsorship opportunities with naming rights of the gallery are still available.

More info about the MoonArk >>

The MoonArk Headed to the Centre Pompidou

MoonArk To Be Unveiled at Thrival Festival
Top of Page