Moore, a Fellow of the Industrial Designers Society of America, is an internationally renowned gerontologist and designer, serving as a leading authority on consumer lifespan behaviors and requirements. For a period of three years (1979-1982), in an exceptional and daring experiment, Moore traveled throughout the United States and Canada disguised as women more than eighty years of age. With her body altered to simulate the normal sensory changes associated with aging, she was able to respond to people, products, and environments as an elder. 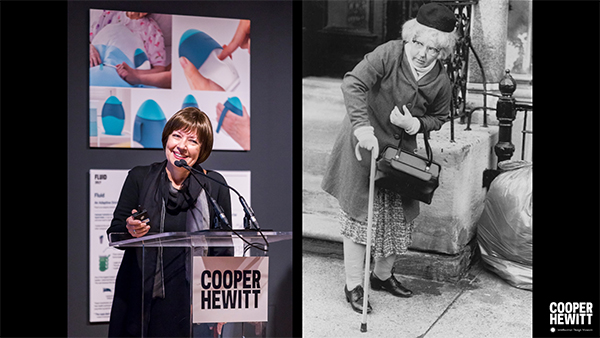 This year, Moore was also awarded an honorary PhD from Hasselt University in Belgium for her efforts towards “inclusion and excellence.”

“I recently asked my Agent what the heck was going on with all of the recognition I’ve received this year, wondering if (in the wickedly dark humor of the Irish) I was dying and the doctors hadn’t told me,” joked Moore.  “But, seriously, every time you receive an accolade, it is always so very reassuring that you are on the right path and that you are making a difference.

“Perhaps it was the way I was raised and the philosophic order that defines me, but making the world a better place is the most important thing to me.”

Moore served as the Nierenberg Chair from 1996 through 1997 at the School of Design. The Nierenberg Chair of Design is one of the most prestigious visiting appointments within design education in the United States. Established through a generous gift from the late Mr. Theodore D. Nierenberg (CMU BS’44) and his wife, Martha, the chair is given to an outstanding individual who has achieved national or international prominence in design or a design-related field.

The goal in establishing the Nierenberg Chair was to enhance the vitality of the School of Design for students and faculty alike by encouraging dialogue on important issues of the field, exploration of contemporary forms of design practice, and research that affects future practice and understanding.

Throughout all of her accomplishments and accolades, Moore still fondly reflects on her time at Carnegie Mellon as the Nierenberg Chair and the relationships she developed with the students and faculty here.

“When I was Nierenberg Chair, I thoroughly enjoyed team-teaching with John McClusky (who went on to serve as the Director of Design for Moore’s consultancy),” said Moore. “We had a wonderful time with the Juniors and Seniors we taught.  I always warned students that ‘I am the Mother you didn’t know you had!’ and I take that role very seriously.”

A few years after I finished at CMU, I was lecturing at the California College of Art in San Francisco, on what just happened to be my birthday,” added Moore.  “Just as I took the stage after my intro, several of the CMU Grads I had taught, all now working in the Bay Area, were standing and singing Happy Birthday! I was so very touched and I must say they not only felt like my precious children, but I couldn’t have been prouder to see they were now happy and fulfilled, practicing professionals!

“At this stage in my career, the greatest joy for me is passing the proverbial torch to the next generation of Designers.  I burst with pride at their success and happiness.”

Today, in addition to lecturing at universities globally, Moore sits in board rooms of the numerous influential companies and endeavors to share her attitudes and beliefs on how they might influence what comes next for our planet and its peoples with equity, by design.

“As I lecture ‘round the world today, I often ask the audience to consider how well we might be doing if there were more designers and engineers in governance,” said Moore.  “We know that when physicians entered the houses of leadership, advances in medical legislation were achieved.

“I continue to encourage students to consider blending their design focus with medical and social sciences for the most humane outcomes. Creativity and Innovation require a complex consortia.  Speaking as many ‘languages’ as we can as Designers is essential for the most humanistic results.”

More on the Nierenberg Chair at the School of Design >>

Please join us for another edition of our Design Lecture Series with Creative Director/VFXArtist/Typographer Katie McIntyre on November 2, 2021 at 5:00pm EST.