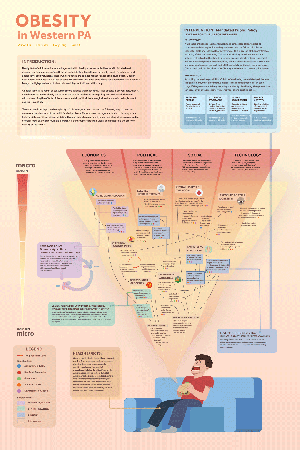 RSD9 is an annual week-long program dedicated to systemic design, hosted this year by the National Institute of Design of India, with the theme was “Systemic Design for Well-being: From human to humane.”  The Gigamap Exhibition featured systems maps developed by four teams of students in their Systems Thinking course during Spring 2020.

“Students learn to understand the impact of design at a systemic level: from the micro to the macro,” said PhD Researcher Sofía Bosch Gómez, who was one of the instructors of the course with Donna Maione.  “How design can have a ripple effect at different scales and how to think about this in regards to the future: what sort of design interventions do they want to develop in order to impact larger socio-technical systems considering its future repercussions.

“So we prompt them to think contextually to design responsibly.”

The maps featured at RSD9 cover the topics of the Obesity Epidemic, Rising Adolescent Depression, the Opioid Crisis and a deeper focus on Obesity in Western Pennsylvania. The School of Design maps were also unique in that they were the only maps presented in the symposium that were developed by first year undergraduates. 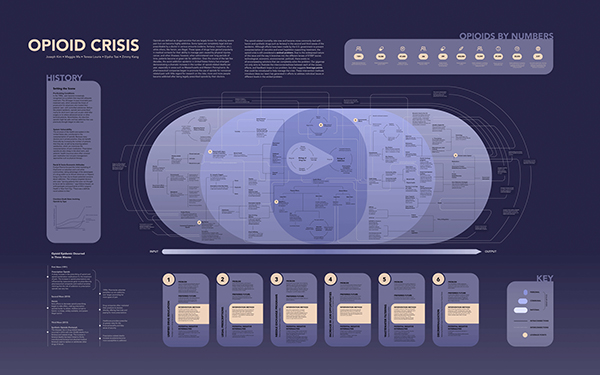 “Our map is unique from others by its balance of complexity and readability of information through context and composition,” said Joseph Kim (BDes ’23), speaking for his team’s map which looked at the opioid epidemic in the United States. “It communicates the interconnectedness of problems via systems of analysis, while also acknowledging the stakeholders. Moreover, we presented a detailed list of intervention points with consideration to negative externalities to the proposed solutions.”

For Chris Han’s (BDes ’23) team, as they looked at the obesity epidemic, they realized the problem went much deeper than they originally thought.

“Upon first glance, obesity might be seemingly easy to solve— eat healthy, go to the gym and lose weight,” said Han. “However, this problem has engulfed almost 37% of the American population with systemic issues affecting a myriad of demographics. Layers of systemic and systematic interconnectivity bury complications from the public eye, making large-scale issues like obesity difficult to tackle." 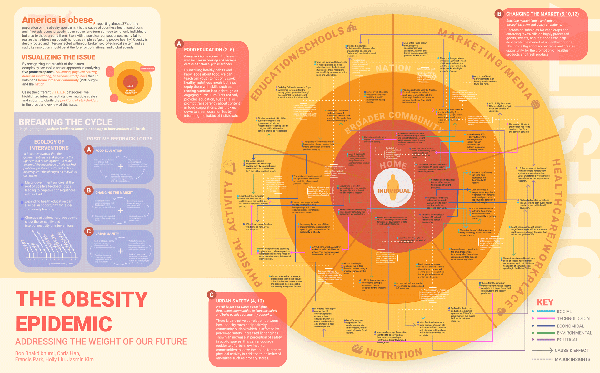 “Our group uncovered this complex system by analyzing the problem with a scalar approach, placing a multitude of stakeholders within the distinct problem spaces throughout a micro-to-macro scope,” continued Han. “By pinpointing clusters of defects and flaws, then filtering them through STEEP (Social, Technological, Economic, Ecologic, Political) lenses, the map clarifies interdependencies within the various aspects of our daily lives”

For all of the students, the perspective of designers are vital when it comes to solving wicked problems like these.

“Designers play a significant role in addressing these problems by visualizing complex issues to help the general public understand and catalyze change,” said Kim. “As designers, we need to be cognizant of the diversity of stakeholders involved.” 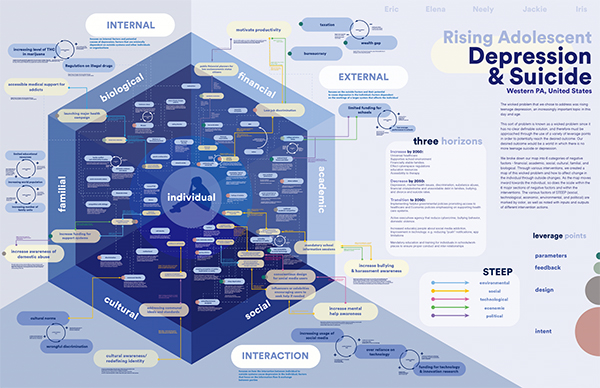 “Often we think problems like such are one-dimensional, however, designers are able to take a step back and see the whole picture,” said Han. “We realize that wicked problems are much more complex and messy. Not only is the solution important but really understanding how everything is connected is just as crucial as well. Designers are able to take these findings and visualize it. This brings a different perspective to the problem and the audience is able to see and fully grasp how complicated the problem is.”

“CMU is one of a handful of universities that have systems thinking woven into their undergraduate curriculum,” added Gomez. “The School of Design is a pioneer in the way the topic is taught, more so to First Year students. The syllabus is designed in a modular form in order to address the topic as praxis: the intersection between theory and practice.”