For the third year in a row, Sophomores from Carnegie Mellon University’s School of Design will be featured at the Relating Systems Thinking & Design Symposium (RSD10). This hybrid event will take place November 3-6, 2021 and the host this year is the Delft University of Technology in the Netherlands.

RSD10 is an annual week-long program that provides a platform to showcase and discuss ongoing work with peers in the systemic design field. The main theme of the conference this year will be “Playing with Tensions – Embracing new complexity, collaboration and contexts in systemic design.”

The students will be taking part in the Gigamap Exhibition with systems maps they developed in the School of Design's Systems Thinking course during their First Year studies. They were tasked with identifying a wicked problem and using systems thinking to identify an array of solutions.

“Students learn to understand the impact of design at a systemic level: from the micro to the macro,” said PhD Researcher Sofía Bosch Gómez, who was one of the instructors of the course with PhD Researcher Donna Maione.

There are currently seven teams of students whose systems maps have been accepted into the exhibition and the topics are wide-ranging, each tackling a different complex tension:

“We chose air quality in Delhi because one of our team members was familiar with the intensity of the problem and how much it affects the everyday lives of the people who live there,” said Max Stockdale, speaking for his team. “We spent a lot of time researching and mind mapping to find as many intervention points as possible. Overall, we learned the importance of using a gigamap approach instead of approaching it with a linear process. After completing our map, we were able to show the different parts that contribute to the problem and how we as a society can affect positive change. Being able to be accepted to the RSD10 Symposium is a huge honor and we look forward to sharing our work with others.” 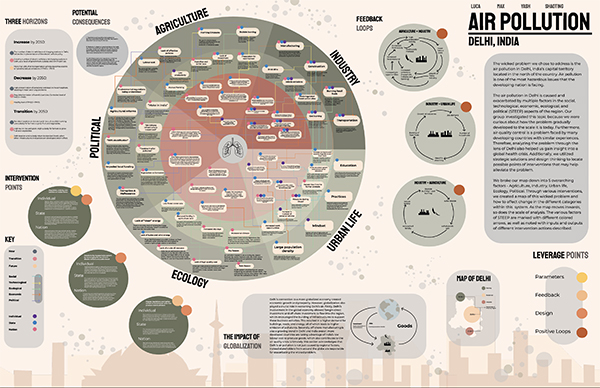 Elise Chapman’s team looked at anti-black racism in Pittsburgh and they struggled with identifying where and how to start their examination of such a complex problem. They opted to distribute the focus area using the STEEP analysis and in doing so, “divided the work to give each person an area of "expertise", said Chapman, “which helped with drawing connections later and made it so every person didn't have to wrap their head around the whole problem. 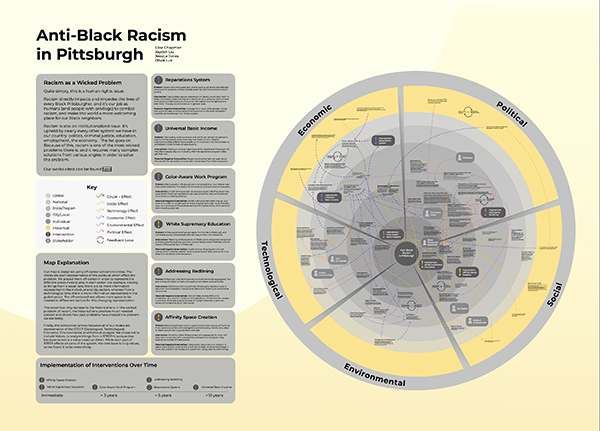 Catherine Liu’s team, fousing on identifying solutions for healthcare in New York, also found it was difficult to start the process of untangling a complex system.

“Since healthcare has many different sub-sections, it took us a while to choose which sections to focus on as key problems," said Liu. "In addition to the information, we also worked carefully on how to best present our research. We felt that the map’s visual qualities were just as important as its information and wanted to represent it in a way that was easy to understand. In the end, we are proud of what we made and are grateful to be accepted for the symposium.” 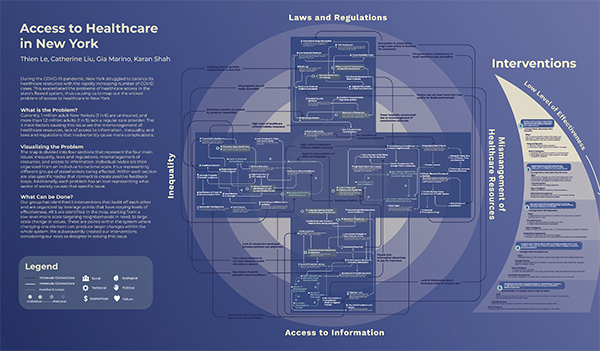 “CMU is one of a handful of universities that have systems thinking woven into their undergraduate curriculum,” added Gomez. “The School of Design is a pioneer in the way the topic is taught, more so to First Year students. The syllabus is designed in a modular form in order to address the topic as praxis: the intersection between theory and practice.”

More info about the RSD10 Symposium >>