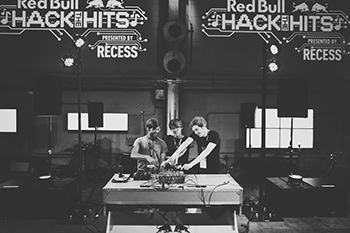 A team, featuring Carnegie Mellon University Student Tiffany Jiang, just took home the grand prize at the first Red Bull “Hack the Hits” Hackathon. Jiang, a sophomore double majoring at the School of Design and HCI, and her team, featuring Laurence Putterman and Ritwik Gupta from the University of Pittsburgh, won the Hackathon after taking just 24 hours to create a MIDI controller that mimics the experience of playing a string instrument.

The Hack the Hits Hackathon challenged students to see how far music technology can be pushed. Over 24 hours the competing teams were encouraged to use tools like Ableton, Leap Motion, and musical instruments to develop a new way to play a sound. The judging criteria were based on musicality, innovation, and usability.

“Of course, we all are passionate about music and technology,” said Jiang who was also the only female team member at the entire Hackathon and her team was the only one from outside of California. “None of us really had too much hardware experience coming into this competition. Although the three of us have done traditional collegiate Hackathons, we were used to coming up with web-apps or mobile applications.

“I thought this would be a cool opportunity for all of us to do something new.” 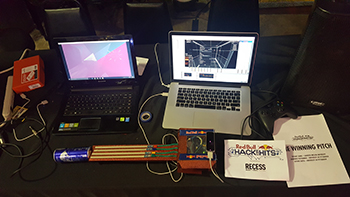 Over the course of 24 hours, each of the 5 teams tried to create an expressive, playable instrument that could be used in a live or studio setting. Jiang’s team created their hack, Touch Tone, using four touch sensitive thin potentiometer sensors connected to an Arduino and some cardboard. They recreated the general shape of a guitar, where the sensors took the place of strings. This enabled the player to expressively slide their notes just like a string instrument player.

In addition, a Leap Motion attached to the body of the instrument allowed players to modulate effects by gesturing in front of the instrument with their hands. The sensors send their output to the Arduino, which relays the information over a serial connection. Max for Live, a powerful visual programming environment specifically designed for interfacing with Ableton Live, receives this data, separates the data according to the sensor, and transforms those values into MIDI.

“Our hack was one of the projects that was fully functional by the end of the competition,” said Jiang. “A couple of teams ran into technical difficulties and were not able to get the end product to work the way they had wanted it to.

“I think our idea was also different than other projects because we made an entire instrument from scratch whereas another team hacked parts of an already existing electric guitar.”

The team, “The Winning Pitch”, marked the event as a wonderful experience.

“The mentors were really helpful and taught us many new programs and technologies on the spot and our team worked really well together,” added Jiang. “I was impressed by how quickly the three of us were able to pick up new technologies and integrate them into our ideas. 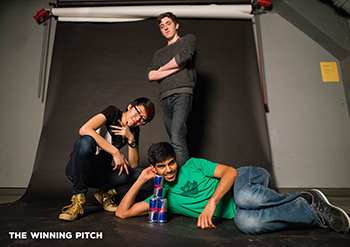 “This Hackathon was also different in the sense that we got to really think through our idea before showing up. We actually reached out to some classmates who had previously done music hacks. And we also got the opportunity to talk to Jesse Stiles and Luke DuBois, two incredibly talented professors who are currently at Carnegie Mellon under the Studio for Creative Inquiry program.

“They helped us brainstorm and get the ball rolling when we started testing out our idea to see if it’d be possible.”

Jiang looks forward to more participation at future hackathons after her recent victories at Hack the Hits as well as the Facebook Global Hackathon in December.

“If you’re unfamiliar with the technology, you just have to do it,” said Jiang. “Play around with it, ask for help, utilize the resources around you and figure it out.

“Or don’t but either way you will learn something from the experience.”

Read more about Hack the Hits on Forbes >>