UNDERDONE: What’s The Least A Designer Could Do? 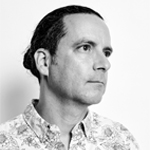 Design’s promise is both blessing and curse; it aims to deliver preferred states, behavior change, and added value. But often its heavy hand and deliberate drive to combustion can alienate and even raise suspicion. This talk interrogates what the minimum of design can accomplish through dozens of tangible examples—from the recklessly aspirational to the deadly practical. In an era when design promises the most, what then, might the least we could do look like?

Allan Chochinov is the Founding Chair of the MFA in Products of Design graduate program at the School of Visual Arts in New York City, and a partner of Core77, the design network serving a global community of designers and design enthusiasts since 1995. Allan lectures widely at professional conferences, and has been a speaker and guest critic at schools including MIT, Yale School of Management, Columbia School of Business, RMIT, IIT, and Carnegie Mellon. He has moderated and led workshops and symposia at the Aspen Design Conference and the Rockefeller Center at Bellagio, and is a frequent guest critic and competition juror. Prior to SVA and Core77, his work in product design focused on the medical, surgical, and diagnostic fields (projects include work for Johnson & Johnson, Oral-B, FedEx, and Herman Miller). He has been named on numerous design and utility patents and has received awards from The Art Directors Club, The One Club, I.D. Magazine, and Communication Arts.