Civic Futures: Design at the intersection of technology, institutions, and the built environment 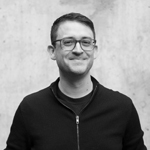 Bryan is cofounder and partner at Dash Marshall, an architecture and strategic design studio working with people who care about cities. Bryan runs the studio's Civic Futures practice, serving clients such as Google, Bloomberg Philanthropies, and the Museum of Modern Art with a focus on new technology, urban environments, and institutions. Previously he was a founding member of Helsinki Design Lab at the Finnish Innovation Fund, a pioneering organization working under the auspices of Parliament. Bryan writes on topics of design, entrepreneurship, culture, and public innovation, with publications including LEAP Dialogues: Career Pathways in Design for Social Innovation (2016), Helsinki Street Eats (2012), Legible Practices (2013), and In Studio: Recipes For Systemic Change (2011). He holds a Bachelor of Fine Arts degree from the Rhode Island School of Design and a Master of Architecture I degree from the Harvard Graduate School of Design. Bryan serves on the board of directors for Public Policy Lab in New York City and is based in Detroit, MI.

This lecture took place on November 12th at 5pm in Margaret Morrison Carnegie Hall, room A11.