Kaeo Helder, an alumnus from Carnegie Mellon University’s School of Design (BFA ’12), was recently featured on CBS news for his work as an Industrial Designer with Candylab Toys. 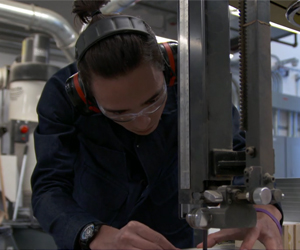 For the past 5 years, Candylab Toys, founded by Brooklyn-based architect and designer Vlad Dragusin, has been delivering handcrafted wooden cars inspired by “the glamorous '60s American modernist vibe,” with the goal of delivering experiences that bring children and adults together.

“We’re slowly drowning in forgettable toys that break and disassemble — ending in piles of plastic bits — this determined us to create a line of heirloom wood toys that are elegant, durable, and simple, giving children a chance to create their own stories around the objects they play with.”

“Right off the bat there is the beautiful color,” said Helder to CBS News about the cars. “When you dig in deeper there are a lot of small details that are very well considered.  You have small iconic moments that are pulled from actual cars that you can see.”

Helder, who started working as an Industrial Designer for Candylab in February 2017, handles a wide variety of tasks at the company.

“As a member of a small team I tackle a wide variety of roles: Product Development, Design, Engineering, Design For Manufacture, Packaging, and working closely with overseas factories for production,” said Helder. “My day to day involves managing multiple work streams and deadlines to make sure that production is kept on track as well as working with our team to design and engineer new products for our ever-growing catalogue.”

That ever-growing catalogue also includes a current Kickstarter campaign being run by Candylab for their next line of cars “The Outlaws – A 1920’s Tale.” This campaign, which is Candylab’s 6th successful Kickstater, will deliver a line of 1920's-inspired, vintage wooden cars that take cues from a mix of Art Deco modernism and the daredevil, rough and oily car culture of those years. The line will feature five models, each with its own story and inspiration behind it.

“It’s inspired by the hot rods and rum runners of that era,” said Helder about the new line. “We’re trying to include a lot of colors and details based on the cars of that era. It’s going to be really kid-friendly and fun.” 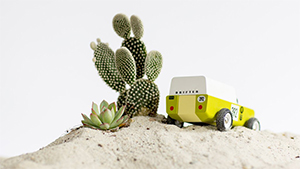 Helder notes that the education he received at the School of Design comes up in his day-to-day at Candylab.

“I definitely think there are many things CMU taught me that are key,” said Helder. “Beyond the technical background and skills, like sketching and time in the shop, the ways of approaching a problem and using the design process that I learned at CMU have really carried me through.”

Helder also fondly remembers his time in the studios here at CMU.

“I really enjoyed the collaborative atmosphere in the studio,” added Helder. “Making your workload manageable while sharing and collaborating with my classmates was a driving force for me.

“From what I’ve learned from talking to other designers, the School of Design’s atmosphere around the studio and the environment of creating and building is unique, especially the projects from Freshmen and Sophomore year. The work you do by hand and the skills you learn to prototype and problem-solve quickly were invaluable.”