At the end of the 2019 semester, Carnegie Mellon University’s School of Design was honored to award four PhDs in Transition Design to our candidates, Ahmed Ansari, Stephen Neely, Anne Burdick and Kakee Scott. 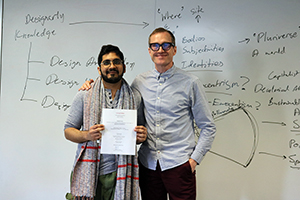 On April 11th, Ahmed Ansari successfully defended his PhD dissertation “Decolonising Design Studies.” Ansari sets out to challenge the conventional approach to design studies which typically elevates the Western (European and American) contribution to the history and development of design, whilst neglecting other traditions. Such traditions reflect ways of being and ways of thinking that are richly developed and complex and have guided and informed local and regional design. Focusing on the Indian subcontinent, Ansari shows how Westernized design often unconsciously compromises or extinguishes other ways of being in the world and other ways of knowing. He argues for pluralism in design, in which many different cosmological and cultural perspectives can continue to flourish, whilst mutually influencing one another.

In his argument for a design approach that fosters  a “world in which many worlds exist,” rather than a homogenizing globalization, Ansari makes a significant contribution to the development of Transition Design and to the Decolonial Design discourse.

“It was a pleasure to spend many hours discussing his thesis with him and watching it develop,” said Gideon Kossoff, Adjunct Professor and Doctoral Studies Coordinator at the School of Design. “He has also developed a brilliant teaching style during his four years as one of the PhD program's teaching fellows.”

The School of Design is also delighted to announce that Ahmed Ansari has secured a job as an Assistant Professor at NYU after graduating. 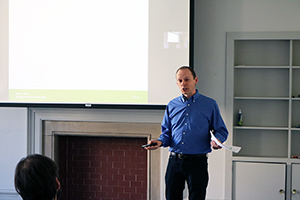 On April 22nd, Stephen Neely joined Ahmed Ansari when he defended his dissertation on Soma Literate Design. The domain of Interaction Design strives for rich interactions, yet continues to work with both a shallow definition of human experience and a fairly meager palette of experiential variables from which to pull. In particular, the presence of "the body" in experience is noted, but poorly understood or utilized by designers.

Through a turning of attention to the bodied dimension of experience, Neely’s research reveals a significantly expanded palette of variables from which interaction design may draw new insight and understanding. Neely’s work frames a new set of priorities for interaction designers, and in so doing, poses a timely provocation, and much-needed practical tools for change.

“Stephen was a joy to work with, and introduced me to a new perspective on designed interactions,” said Professor Jonathan Chapman, Director of Doctoral Studies. “He’s right: all experience starts with the body, and so we can’t really talk about user experience without also talking about how experience works, in a ‘bodied’ and lived sense.” 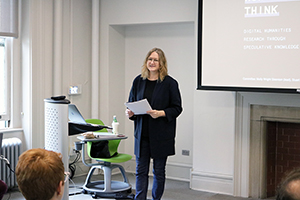 Four days later, Anne Burdick defended her dissertation, “Designing How We May Think” on April 26th, with the notable distinction of requiring no corrections. Burdick’s investigation was conducted through an expanded version of research through design in which workshops, experiments, presentations, and essay-length papers were produced in dialogue with a narrative-based speculative design fiction called Trina. It was this cycling-through that led to the creation of a humanities-oriented design research approach — reflective theory/practice — built from Phil Agre’s critical technical practice, Schön’s reflective practitioner, feminist film’s theory/practice, and Matt Ratto’s critical making.

Trina uses design and literary figuring to explore the implications of emerging technologies for future knowledge practices. The story, co-created with fiction author Janet Sarbanes, can be experienced through multiple media forms and the intended audience includes designers, technologists, and digital humanists. As part of the research, Trina was performed in venues ranging from literary conferences to design symposia. The graphic novel was distributed to prominent critics from diverse fields who were invited to submit a critical interpretation of the story. The exegesis builds upon Trina and the associated materials to demonstrate how reflective theory/practice provides an approach to digital tool building that contributes to design theory as it engages with the epistemic effects of emerging technologies in the humanities.

“Anne has taken up vital questions about design and the digital humanities,” said Molly Wright Steenson, Associate Professor and Senior Associate Dean for Research in the College of Fine Arts. “She was already one of the world's leading figures on the relationship between design and digital humanities; through the course of her work at CMU, she developed a unique theory and practice that melds design research, digital humanities, and knowledge production.”

Shortly after completing her PhD studies, Anne took up a new post as Full Professor at the University of Technology Sydney. 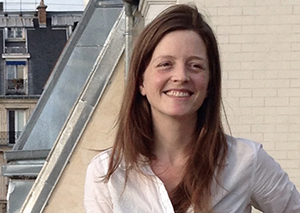 Finally, on May 7th, Kakee Scott defended her PhD dissertation, “Co-creating Alternative Economic Practices Through Design.” Designers participate in circumstances of economic flux, accepting or resisting economic ideas, models and systems of organization that come before us, in a dialogue of practice with the changes happening around us. The practices we adopt and adapt are often framed according to what kinds of systems of economic organization are persistent or emergent in this context. Scott’s PhD explores ways of thinking about and practicing design in support of alternative economic practices, starting from questions about the economic contexts, contributions, consequences and responsibilities of professional and disciplinary design, and extending toward a concern for how acts of design are integral to how economies come to be. It shares efforts to illuminate such implicit processes of design in economic practices, in order to inform efforts for alternative economic practice.

Scott has introduced “designerly economics,” a new way of framing thinking about the entanglement of design practice with economics. In bringing a thorough examination of perspectives on alternative economic practices together with design, her work sets a foundation on which many other researchers can build.

“Kakee is a very thoughtful person, reflecting continuously on her work; our discussions, sometimes with Ramia Mazé (Aalto University) too were fascinating explorations of how to engage with complexity and the interwovenness of design, economics, and society, without oversimplifying,” said Dan Lockton, Assistant Professor and Director of the Imaginaries Lab.

“Our PhDs have the opportunity to explore new frontiers for what design can be, and how designers can work, in the light of much longer-term perspectives,” added Lockton. “It's hard work, and there are no right answers, but our students are helping define how designers can engage with some of the biggest questions facing humanity, in ways which are rooted in designerly understanding of the world.”

Learn more about the Doctoral Program at the School of Design >>

Please join us for another edition of our Design Lecture Series with Chief Product and Design Officer at Headspace Health, Leslie Witt, on February 7, 2022 at 5:00pm EST.

Please join us for another edition of our Design Lecture Series with Visual Experience Designer at Local Projects, Olivia Crosby, on February 21, 2022 at 5:00pm EST.