Carnegie Mellon Racing, a student-run electric racing team that designs and builds an entire open-wheel electric racecar every year, recently won multiple awards over this summer. The team’s awards include taking first place in the electric category at the Formula Hybrid competition and placing 5th overall, as well as second in both design and efficiency, and took home the Cummins Innovation Award from Formula SAE Michigan.

As the CMU chapter of the Society of Automotive Engineers, Carnegie Mellon Racing provides undergraduates with opportunities for technical and management experience on a large engineering project as they design and build a fully electric formula-style race car to compete with university Formula SAE teams around the world.

Tate Johnson, a rising Senior at Carnegie Mellon University’s School of Design, sees the interdisciplinary approach the team takes as a key factor to what puts their designs ahead of other cars in the field.

“Our team focuses a lot on parametrization and controls compared to many of the other teams,” said Johnson. “I think that CMU's electrical engineering offerings help us stand out with our strong battery and electrical program on the team. We use hub motors which allow us to control the power and braking at each wheel individually, meaning that we can study and optimize the vehicle dynamics for the different competition events. I led the development of our steering wheel, which allows the driver to seamlessly view and modify vehicle controls settings while the car is in motion.”

“I worked on a couple of the driver interface/cockpit systems this year, and we leveraged things like an ergonomics testing rig, rapid composites manufacturing, and new driver controls that helped us to push the design of this year's car forward,” continued Johnson. “Our team uses a thorough design review system during the early development of the car, requiring system leads to present their designs to relevant team members and occasionally alumni and engineers from our sponsor companies." 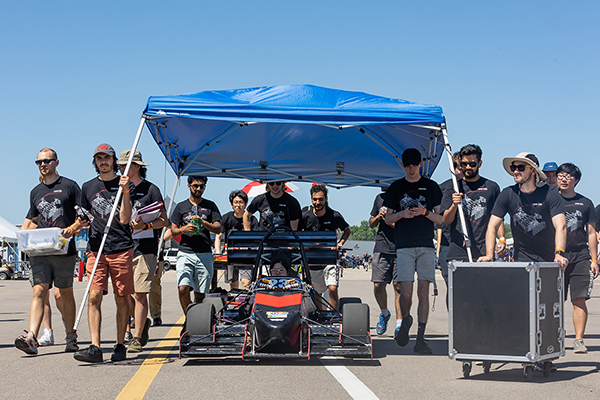 Being the only student representing the School of Design on the team, Johnson thinks his experience as a designer truly informed how the team approaches the human factors, including “human-vehicle integration,” in their design.

“In the projects that I led, driver-vehicle synchronization was a key design goal,” said Johnson. “The more direct the haptic feedback is from the vehicle's performance, the faster and more efficiently the driver can respond. Driver positioning is also a key, as we strive to put drivers of various sizes in the optimal performance position to command the car.

“Another large design problem in the competition is optimizing the manufacturing and accessibility of the vehicle,” continued Johnson. “I've been able to work closely with our composites team to iterate on how we can improve our carbon fiber manufacturing which frequently blocks our progress in the spring. Many of the successful teams at competitions don't succeed because of large engineering innovations, but more often than not they were the most effective at organizing the manufacturing, assembly, and tuning of their car, which is a very human-centered problem.”

Johnson went on to say how truly amazed he was that the team can go from a mockup in September to a fully functioning racecar in April.

“As a designer, it has been a great experience for working with engineers from different fields and getting a better grasp on their processes and tools,” said Johnson. “Designers have a lot to offer to organizations like Carnegie Mellon Racing, as the diversity in disciplines pushes our team to think in new and creative ways about how we tackle these large problems.” 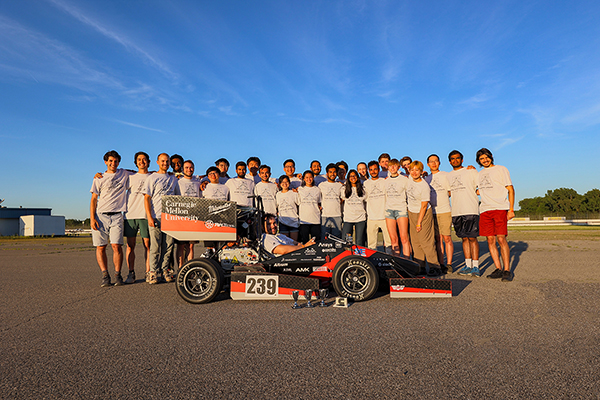 The judges are definitely noticing. In May, the team took home first place in the electric category from Formula Hybrid, after an 8 year absence from that competition. In June, the team placed 5th overall in the Formula SAE Michigan Competition at the Michigan International Speedway. In that competition the team placed second in both the design and efficiency categories out of a field of over 50 different universities. The team also earned the Cummins Innovation Award, a separate sponsored award citing the teams flexibility and innovation amidst the complications of the COVID-19 pandemic. At these competitions, the team was also able to get feedback from engineers at places like Tesla, SpaceX, and Ford.

But what’s next for Carnegie Mellon Racing?

“We're jumping right into working on next year's car,” said Johnson. “We usually tend to spend the summers working on high-level simulation and discussion of larger architecture or technology changes, then we can hit the ground running in the fall with designing and testing systems for the 2023 car.

“By having our inspections and competitive events right after each other, as well as getting the opportunity to meet with other FSAE teams, there is a lot of compressed knowledge from the competition that we need to translate into goals for the next year.”

The 3rd International Conference on Design Futures will discuss the methods and frontier thinking of design futures from the perspectives of future philosophy, future design education, future creation, and future society, respectively, in the cross-cutting fields of philosophy, aesthetics, science, and sociology.

Paul Pangaro, Visiting Scholar in the Carnegie Mellon University School of Architecture and School of Design, will moderate a conversation with Daniel Rosenberg Munoz, Assistant Professor in the School of Design, Daphne Peters, Assistant Teaching Professor in the School of Design, and Claire Hentschker, Design Strategist, Lab at Rockwell Group New York (and CMU College of Fine Arts alumna). Panelists will present real-world examples and speculative student work, followed by conversation with attendees about the opportunities and challenges of new, competitive technologies for retail and services.