While there have been kings, queens, and US Presidents that have all had portraits done of them, only a few have had as many as Pittsburgh-based artist and CMU alumnus, John Riegert. 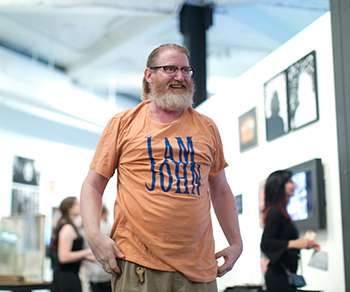 John Riegert is an almost two-year-long project curated by Brett Yasko, a graphic designer and adjunct faculty member at Carnegie Mellon University’s School of Design, which asks the question, “What happens when an entire artistic community addresses the same subject?” John Riegert, which opened at the SPACE Gallery in Pittsburgh on June 24th and runs until September 4th, features portraits of Riegert done by 252 artists from the Pittsburgh area.

“I decided I wanted to do an experiment where I'd ask a bunch of different artists — known and unknown, at the peak of the career or with the peak ahead or even behind — to each do a portrait of the same person,” said Yasko about the project. “But who could that person be? I immediately thought of John.

“He’s an artist himself so he would be understanding to anything that might be asked of him,” continued Yasko. “He has an uncanny ability to make anyone feel instantly comfortable which would be important with so many artists involved. And I thought something like this could be good for him — give him something to look forward to and allow him to re-engage with a community of artists that he was once a part of.”

Yasko was looking for an opportunity to re-engage Riegert with the artistic community due to a prolonged battle with mental illness. 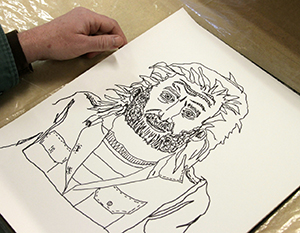 “When his mental health issues started to overtake him," said Yasko, "he became withdrawn and even stopped working on his art for a while. I was part of a group of friends who would always try and be there to help him whenever he needed it.”

Riegert, who has been friends with Yasko for almost 20 years and received his BFA from Carnegie Mellon University in 1992, calls himself a conceptual artist. His works range from photography, photo illustration, performance, installation and writing.

“John has always been one of the most engaging and thoughtful people I know and I wanted others to see this,” continued Yasko. “Throughout the process, he’s reconnected with old friends and made new ones. And he’s given himself completely to the project—enthusiastically embracing any idea an artist has had for him.”

Riegert himself will serve as a docent at the exhibit. Acting as a guide, Riegert has staffed the space and will tell the stories of each work’s making, surrounded by hundreds of portraits of himself.

“I never realized that a giant part of the project are the artists as people,” said Yasko. “Meeting all these talented, generous and kind people. Everyone has a different process and personality and way of working. But everyone has also been so great with John — either in their interactions with him over the year-and-a-half process or their interactions with him at the opening and beyond.

“The work is beautiful and funny and sad and powerful,” he added. “I'm still blown away by that every time I go into the gallery.” 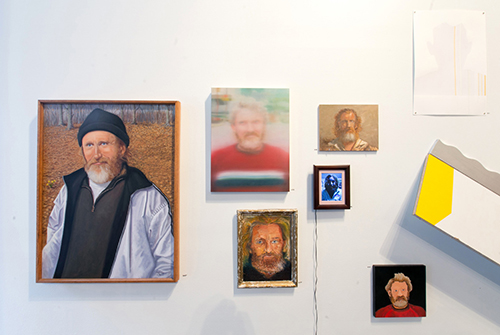 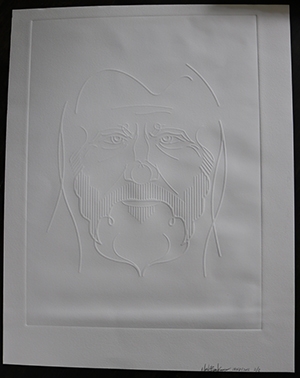 Baskinger’s work, titled “Being There”, is an embossed portrait on paper done through a sequence of hand sketching and vector illustration at CMU’s letterpress facility.

When tasked with creating a portrait for a man he never met, Landesberg framed it within a designer’s mindset.

“I spend my time as a designer responding to external conditions and giving form to a need,” said Landesberg. “That’s what designers do. My personal work is the opposite: it’s not a problem dictated by others, so the idea of an ‘assignment’ was novel and in the end, fun. 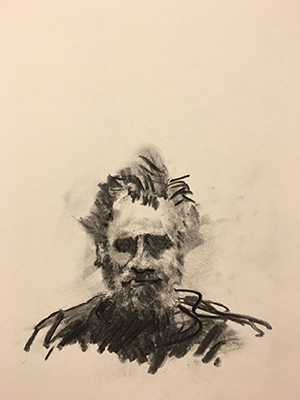 “I thought about it for months, looking at the photograph that Brett provided,” he added. “I imagined a figure that comes out of the paper as if out of misty sunlight. John’s likeness is small and isolated on the page. The white space above is quite purposeful.

“When Brett conjures up a project he doesn’t do it halfway, so I knew that whatever it was it would be good and I was flattered to be asked,” said Landesberg.

What started out to as a project about one man, became a project about the city of Pittsburgh, its artists, and the notion of what it means to be part of an art community.

“Long after the work is taken down and the project becomes a memory, I'll still take with me how lucky we all are to be surrounded by the creative people who live and work here,” said Yasko. “I think I always kind of had that in the back of my head but this project has made me fully realize it and now I think about it every day.”

All images courtesy of the project's Tumblr page >>